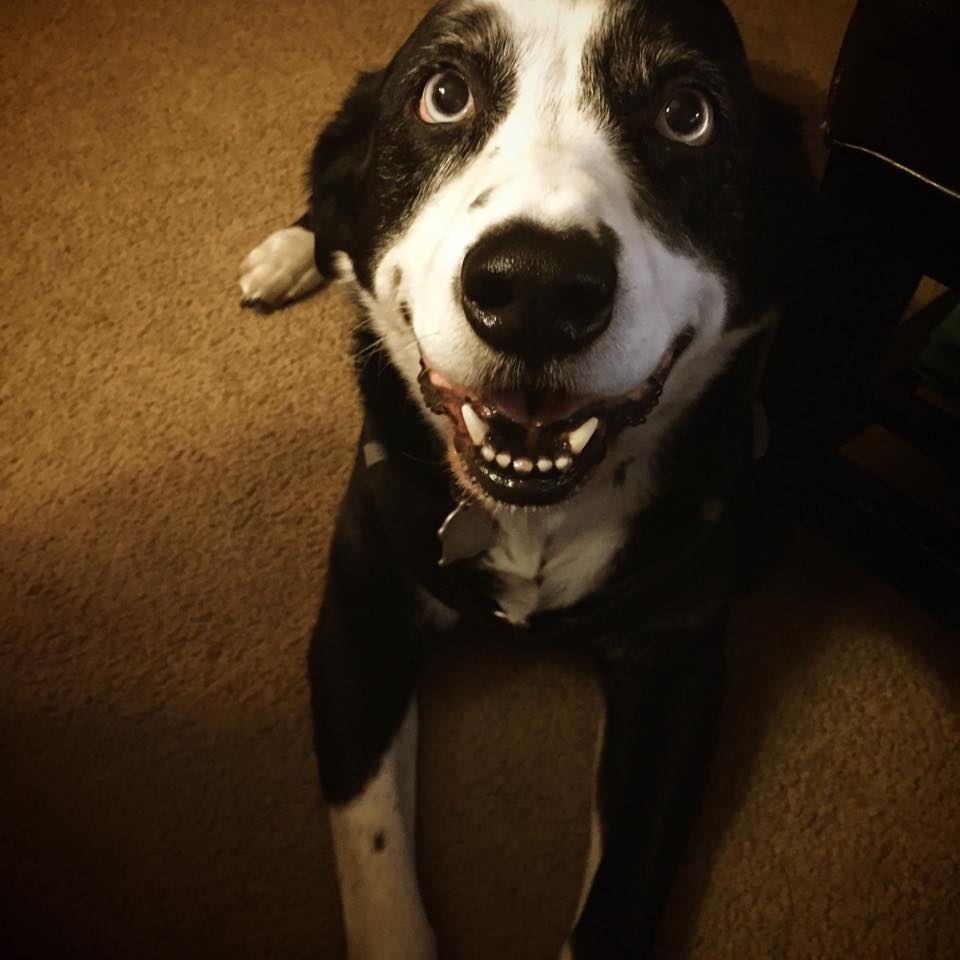 Two weeks ago today, we had to put our dog to sleep. My dog. Sam.

Sam was my dog for almost sixteen years. I got him when he was just a few weeks old. I was still in my first marriage, though not for much longer. My ex and I saw someone selling pups on the side of the road in Denton. Yeah, it’s a thing. I had never heard of the catahoula breed before. But there they were–six pups all blue merled and wearing pink and blue bandanas. I picked up each one, one by one. They were so darn cute. But the all-black one, with a white face and paws and belly, and bright blue eyes…oh he had me. When I picked him up, he snuggled into my neck (as he would later often do) and he had me. I named him Sam.

We saw a lot of life together. A divorce, new relationships, grad school, another marriage, a child, jobs, umpteen moves. He was Sam through all of it. Loyal, friendly, attentive Sam. Consistent, calm, careful Sam. 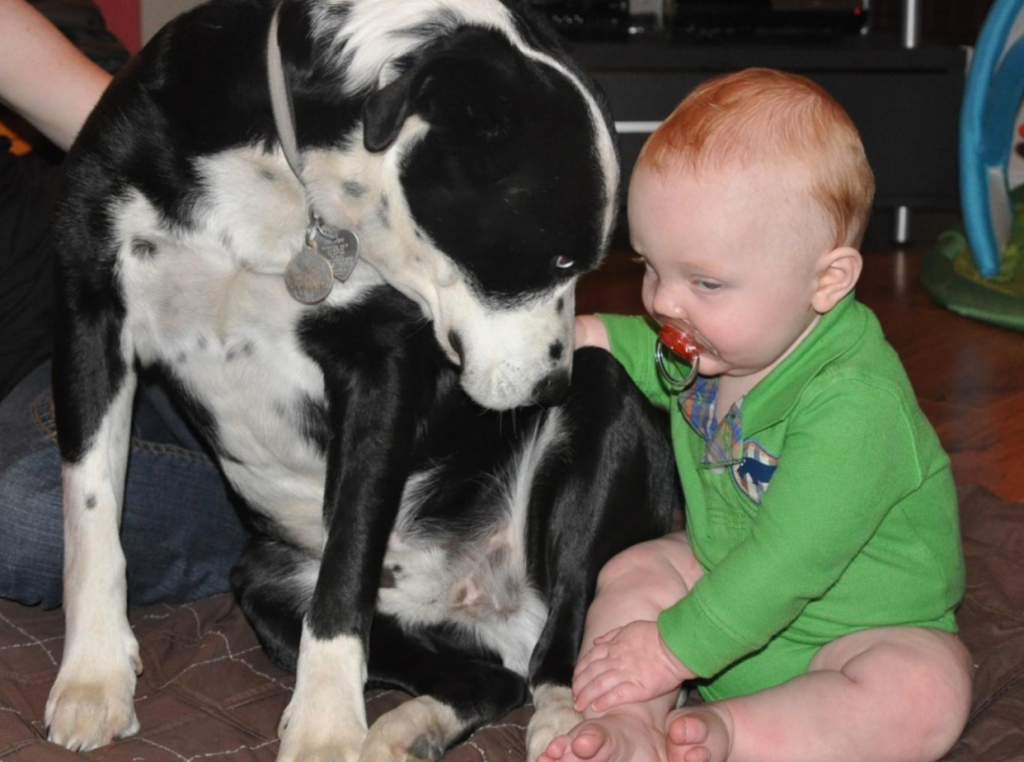 His time had been coming for a while, but I was still not ready for it. I think about him every day. I miss his sounds, his places, his movements. I remember his last moments. He was scared, and I was crying, and then he wasn’t Sam anymore. His empty body relaxed into my arms. I try to forget those last moments, but I don’t think I ever will.

I spent the whole night and a good chunk of the next day crying. And then I got on a plane and left for a conference for 6 days. My sadness bubbled under the surface as I taught workshops and went to dinners. It’s hard for me to be vulnerable–I’m much better at it when I write–so I set my jaw and I tucked my grief away for the week.

I like to think that, of all of the places we’ve moved in our sixteen years together, our home in Vermont was Sam’s favorite. We took lovely hikes together. We snuggled by the fireplace. We played in the snow. 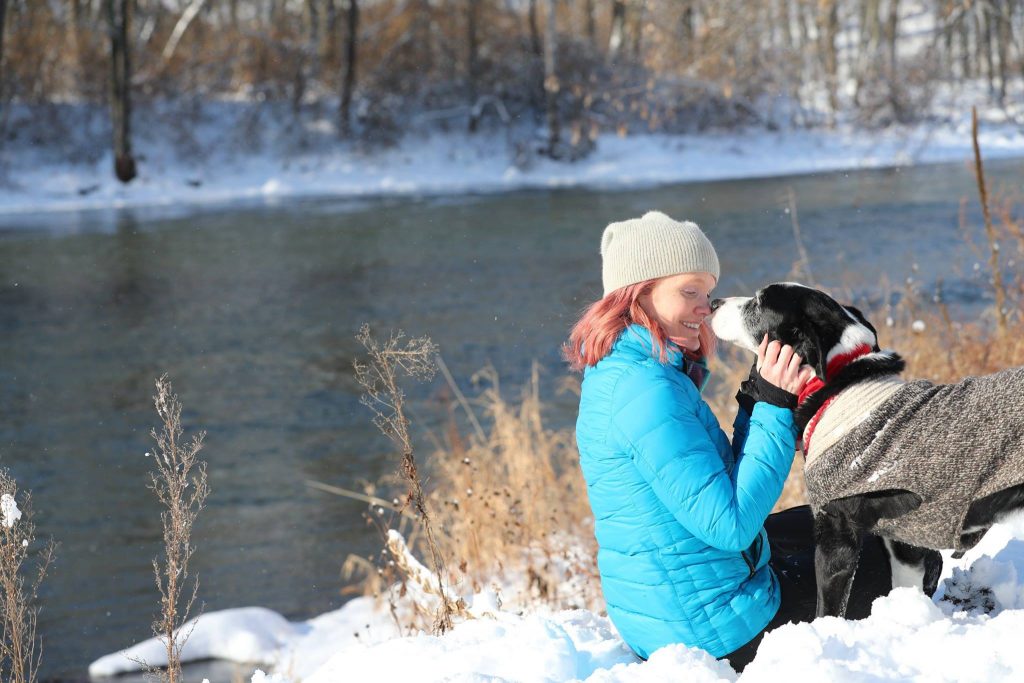 There were picnics, and baseball games, and apple picking, and days at the lake, and he was everyone’s favorite sight at the town Halloween party (he always dressed as a hot dog). He loved to stand on the porch and watch my son get on the school bus in the morning and return from the school bus in the afternoon.

But best of all, we had the river. 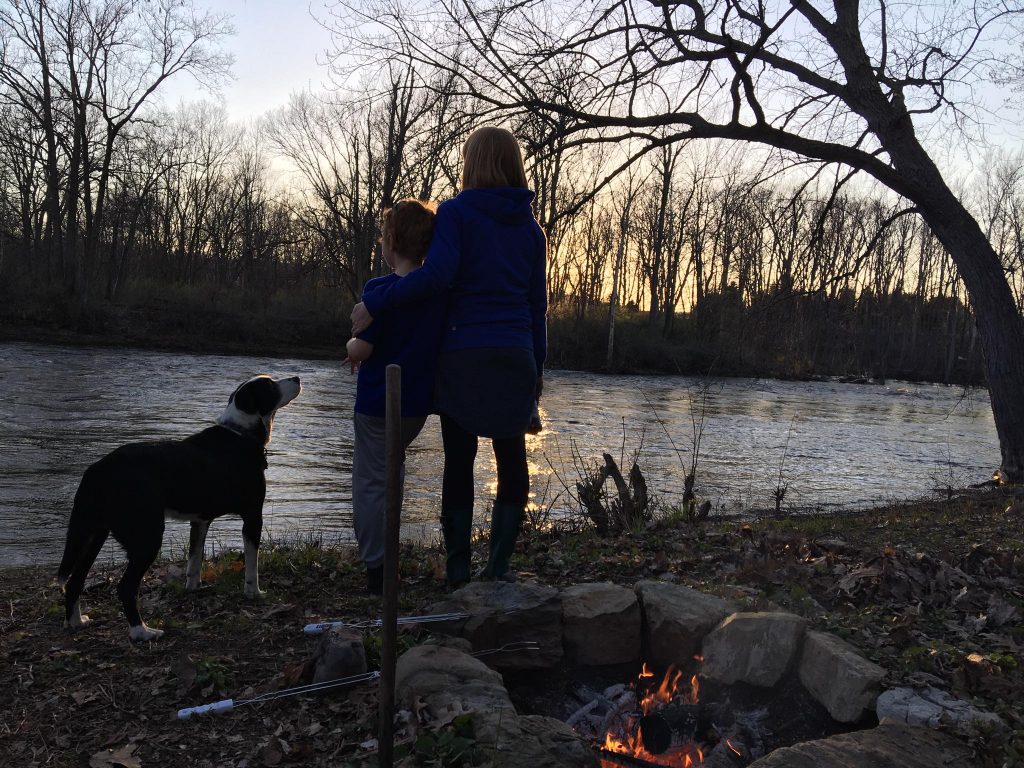 The river that flows through our backyard is my happy place and, by extension, it was Sam’s happy place. Or I like to think that it was. It was by the river and in the river that Sam was most playful, even as play became difficult for him. He’d lap the water for a drink, chase fishing bobbers, and dip his toes in the current for a quick cool-down. He liked to watch the flow of the river. From his bed in our second floor bedroom, he could watch the river and, I swear to you, he did. Sam liked the river. Sam was like the river. Consistent, calm, careful. 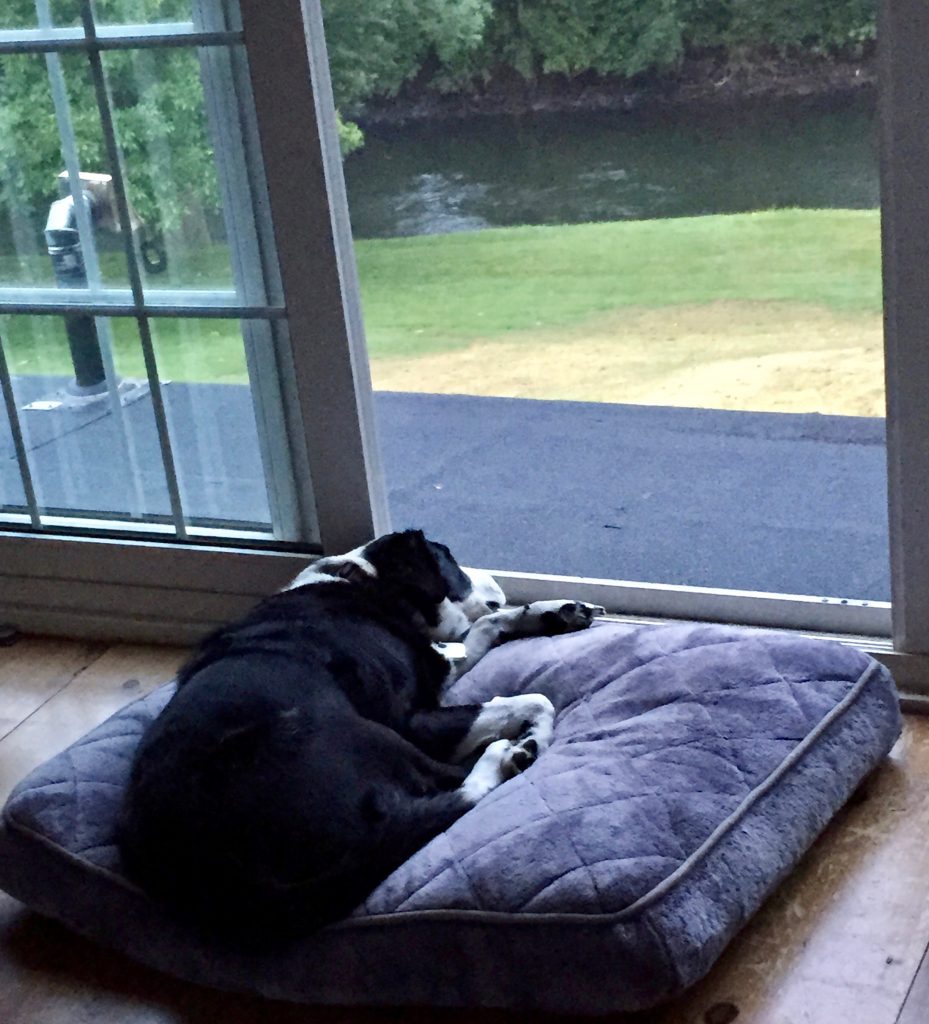 On the day Sam died, I came home from work early to spend a little more time with him. He wasn’t up for a real walk, so we padded down the hill to the river. I was so nervous. I was terrified of life without him. I still am.

We sat down by the river and watched it flow by us.

I will remember you by the river. 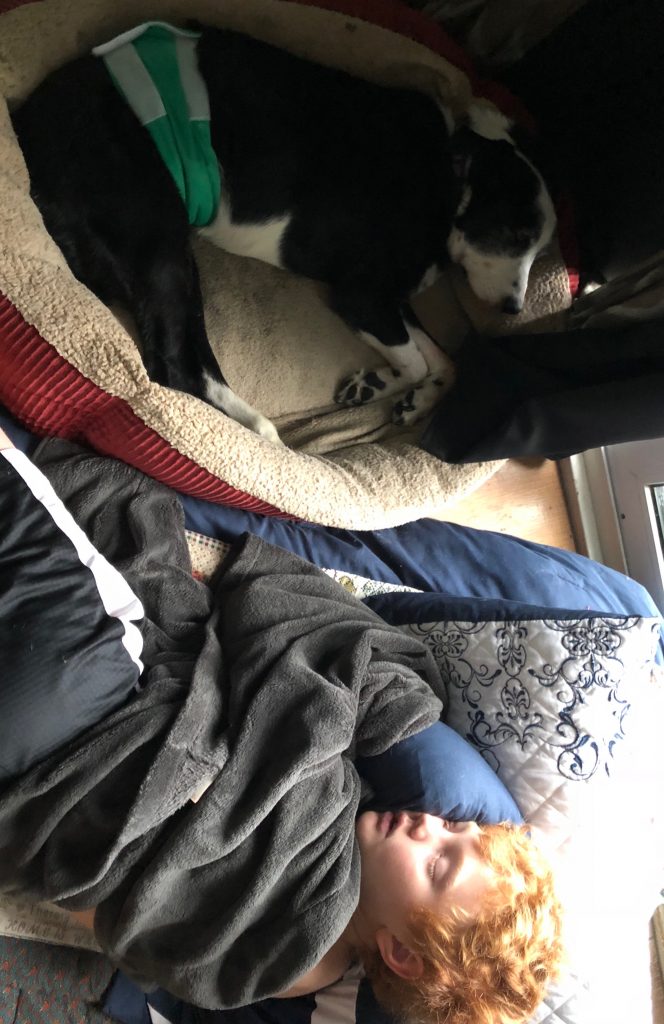 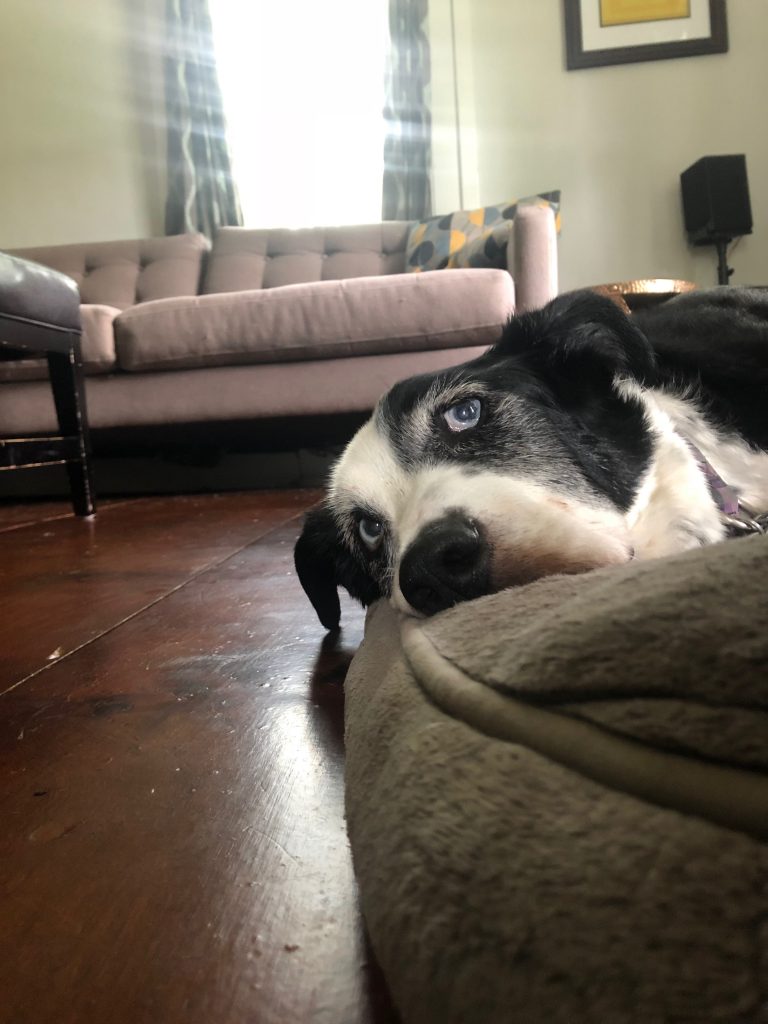