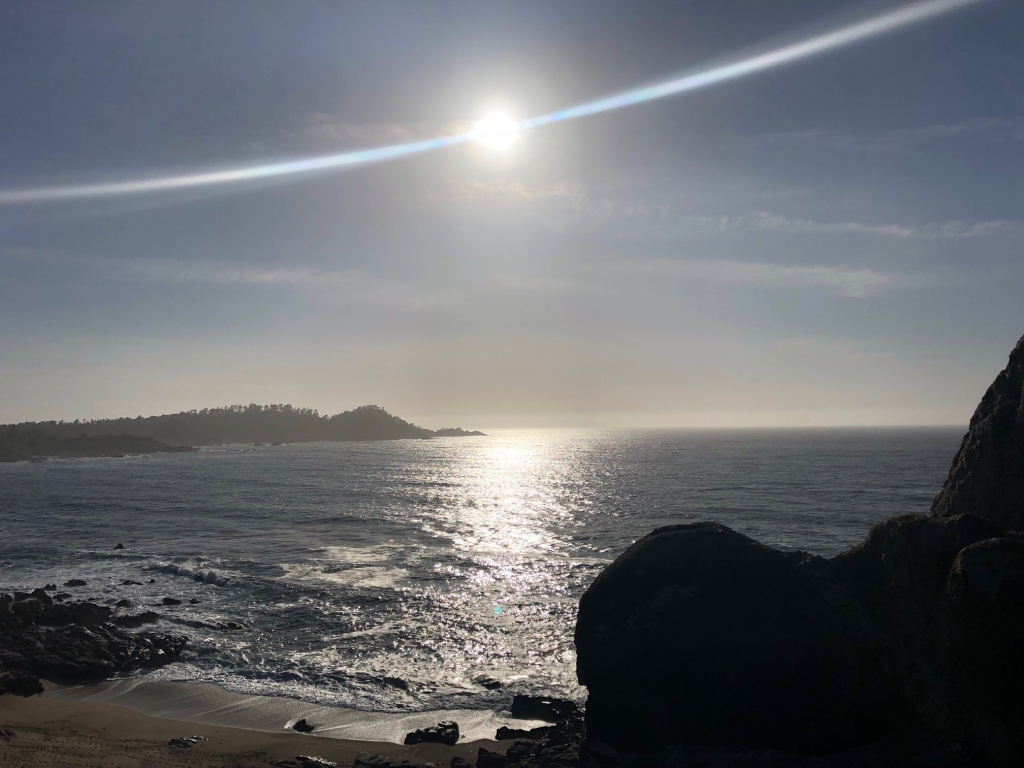 Every morning as I’m waking up, my brain picks a song and turns it up to 11.

It’s like the radio clock in Groundhog Day, except that it’s a different song most days.

It’s usually either a Jazzercise song or a Punch Brothers song.

Today it was the latter. As I woke, the gentle strums of This is the Song (Good Luck) creeped into my head.

The song followed me through the day. That’s not unusual. Most days, you could stop me in the middle of something and I would tell you the song playing in my head at that moment.

It can be disconcerting to always have a song playing in your head. Why is it there? Why that song?

It can be more disconcerting when there’s silence. I guess I choose to have a song.

I’m perched on a rock atop a cliff overlooking the Pacific Sea. I’m in Monterey for the week and one of my students here told me about a little hidden path by the sea, just south of Carmel. So I found the path. It’s chillier than I’d like but I am enjoying the sun’s setting into the busy waves.

I pull out of my purse the bottle of cheap wine I bought at Target on my way here and I unscrew the top.

A toast. To Mi Madre.

The sun set on her life today. I don’t know how to process this. Busy waves keep the silence away.

Mi Madre was not my biological mother, but she was the mother of one of my best friends from my late high school and college/post-college years. When I moved to the States at 16–and away from my own family–Mi Madre took me under her wing. I didn’t live with them, but spent countless nights sleeping on the floor in my friend’s bedroom, too in need someone’s care to return to the place where I was living.

“She loved you so much, Sally,” my friend said earlier today on the phone.

“She was my second mother,” I answered as I started to cry.

It’s not even that we were close anymore. It had been years since we last talked.

She gave me my first drink of alcohol. We talked about it—honestly, with no judgement, no fear of reprisals.

“I know, Sally. She was so proud of you. She was in awe of what you have accomplished.”

I forget that there was a time in my life when the idea of accomplishing something with my life seemed pretty uncertain.

I ache to be home right now, where I could open the box of old photographs from that period of my life. Her wake up calls when I slept over (“Buenos dias, mijitas! Es la hora de wake-up-ar!”). The way she’d grumble at “the bubbas” about things they were or weren’t doing. Her comforting hand on my stomach when I busted my neck in her front yard and had the breath knocked out of me. The times she visited us in our college dorm and we played, and sang, and talked ’til the start of the next day.

I wouldn’t be who I am today without her love. Her help. Her belief.

I face challenges stronger because of her. My antifogmatic.

The car is unbearably quiet as I drive away from the beach, the sea still in my nostrils but the warmth of the sun now below the horizon.