Part 2 of notes from my keynote at the Digital Pedagogy Lab in Cairo, Egypt, hosted by the American University in Cairo. Thanks to Maha Bali, our amazing and gracious host, and to AUC for putting together this delightful event. 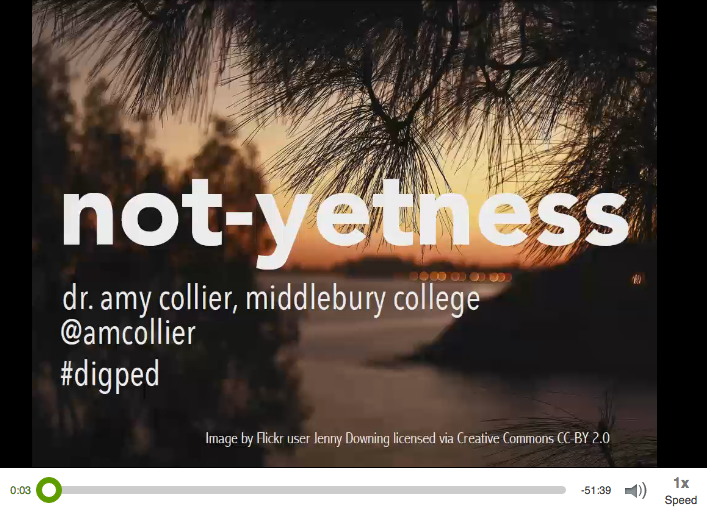 Click here or on the image above to view the video of the talk, Not-yetness

Jen Ross and I have been talking about not-yetness for a couple of years now and, as you may tell by this keynote, it raises a lot of critical questions and makes space for some pretty interesting explorations. I want to talk for just a moment about three areas that not-yetness has helped me to explore lately.

1) Not-yetness as a critical tool for exploring edges and borderlines. Edges are new ideas that are far from the mainstream. Edges are far away from longstanding traditions and ideas, and are often considered dangerous. I love this post that Jen wrote about not-yetness and the edges of digital learning. Jen says, “I’ve been inspired by the idea of the ‘edges’ of digital education: where I think we need to stay to make sure that what we do remains distinctive and relevant as the educational ground continually shifts.” Jen has a paper coming out this year about speculative methods and not-yetness, another exploration of edges. Not-yetness also gives us space to explore the lands around borders—those strict borders we often draw between things—whether it’s borders between concepts like teaching and learning, open education and closed education, formal and informal learning, or other borders (sometimes false) that we create. This quote from Gloria Anzaldua about the physical and cultural borders between Mexico and the U.S., captures the not-yetness created by borders: 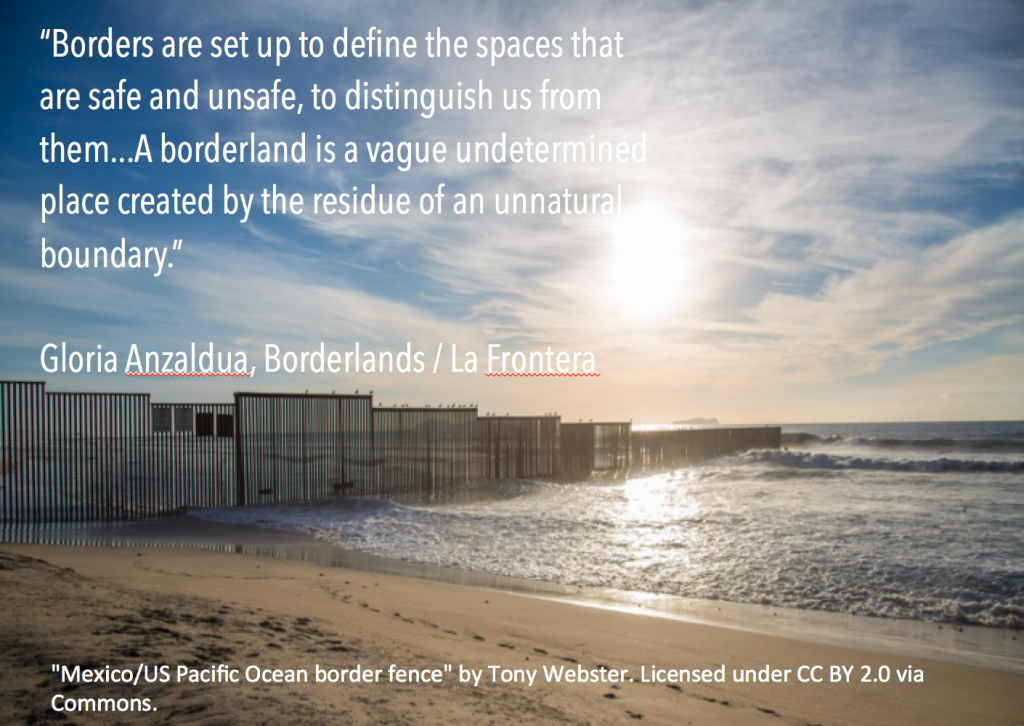 Borderlands, we think, are generative places both because they are undetermined and because people inhabit borderlands as they pass between borders. Stay tuned for a paper Jen and I are hoping to publish later this year that examines the borderlands created by the open education movement.

2) Not-yetness has been a framework for exploring the notion of risk in education. In the past when I would talk about not-yetness,  I would always put up a slide of a screen shot from the game Portal. I always thought that the idea of condescendingly patting people on the head for their willingness to participate in risky endeavors to be kind of offensive, of course, and hilarious. My point before was that not-yetness and other subversive tactics are risky and that risk is a key element of not-yetness. Not-yetness is an embracing of risk. When I read Biesta’s book, The Beautiful Risk of Education, I began to believe that risk wasn’t just something we should support people through, risk is the stuff of education. Often learning outcomes are designed to remove risk from education. We specify the outcomes and we reduce the risk that we will get something different. Biesta says that education is entirely about risk—that you cannot have education without the risk that something will go completely differently from how you intended. That’s education.

3) The last thing that not-yetness has brought to our reflections is perhaps the most complex of all… A couple months ago, I was watched an excellent Gardner Campbell keynote where he led the audience through a taxonomy of student engagement he had developed. He started with the idea that the lowest level of student engagement is compliance. He noted that many educational technologies we see focus on compliance—how many logins, which things are checkmarked. He talked about higher levels of engagement than compliance: interest, then connection. You really should watch the keynote. When Gardner arrived at the highest level of engagement, he paused. The highest level of engagement was “love.” I got goosebumps and I immediately thought about not-yetness. Not-yetness to me is about love. When you love something, when you are part of something built on love, you accept—heck you celebrate—its complexity. You don’t try to reduce it to simple measurable acts, you cherish the messiness and complexity, the not-yetness, of that love.

Jeff Noonan published a post yesterday about learning outcomes and I thought one statement he made fit so well that I included it here: 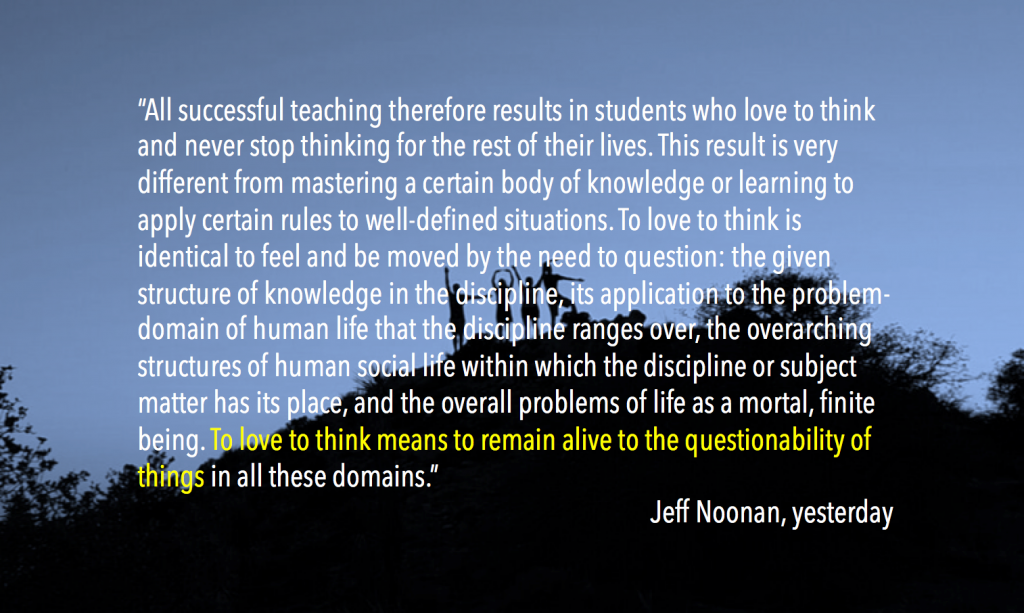 We can take this statement one level higher to say, “To love …means to remain alive to the questionability of things…”

I’m going to wrap up with dance, because I love dance. And yesterday, after Jesse and Sean’s keynote, there was a discussion on Twitter about dance, with questions about choreography and the physical dance space. I am going to take this dance to a different place. When I was thinking about this keynote yesterday, I remembered one of my favorite videos. It’s from a live episode of This American Life, a show featured on National Public Radio. During the show, David Rakoff walks onto the stage to read his piece. This is just months before David passes away after years of battling cancer. He walks onto stage with his left hand shoved into his pocket, his left arm no longer functioning after multiple surgeries and chemotherapy treatments.

David talks about how he used to love to dance but, as his body wastes away and his arm no longer works, dancing has become more difficult and less transformational than it used to be. He grows increasingly frustrated in his monologue until he stops mid-sentence and starts to walk off the stage. Then he stops. And he turns. With music playing softly, he begins to dance. It’s such a beautiful moment. Even though dance is no longer what it used to be for him, even though this dance is a reminder of the pain and deterioration and inevitable death he faces, he dances. An authentic dance. And it’s just beautiful.