…and I was wondering…

Would you be willing to stop sharing terrible stuff? I’m not even talking about racist stuff. Or misogynistic stuff. Or hateful things about immigrants and liberals. Though, at some point, I’m hoping to collect some of you on that, too. 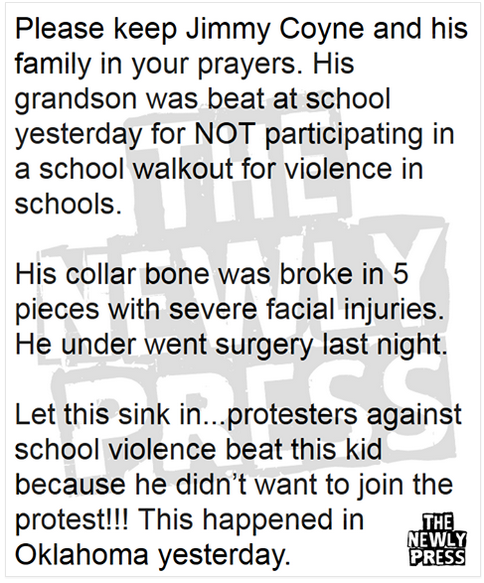 We’re all part of—and sometimes complicit in—a pretty toxic digital information environment. When we spread false information because it suits our worldview rather than meets our expectations for our own honesty, we are helping to polarize (create divisions and animosity between people).

You may not be intending to spread polarizing information—and if you aren’t, that’s great. I have some helpful tips below that you can use to check yourself before reposting something that may be false information intended to polarize.

If you don’t care that you’re spreading false information and propaganda (“I don’t care if it’s true, this is how I feel” or “Yeah! This will show those libtards!”) I may not have much help for you. But I’d ask you to consider that A LOT of the propaganda you’re sharing is being created by people in other countries who have the goal of destabilizing our country by making us hate one another. When we spread false information and propaganda on purpose (or even accidentally), we’re doing their work for them. WE are making America fall apart and lose its power in the world. If you’re cool with being part of that destabilization because the disinformation fits your worldview, well OK then.

If you’re not cool with that—if you think maybe destabilizing and weakening America doesn’t fit with your patriotism—I ask that you consider some helpful steps you can follow to keep from spreading false information. My friend Mike Caulfield calls these four moves and a habit. The four moves are:

1. Check for previous work
2. Go upstream to the source
3. Read laterally
4. Circle back

I’ll come back to those moves with some examples in a minute. The habit is: Check your emotions. THIS IS SUPER IMPORTANT EVEN IF YOU NEVER USE THE FOUR MOVES. Here’s why, according to Mike: “When you feel strong emotion — happiness, anger, pride, vindication — and that emotion pushes you to share a ‘fact’ with others, STOP. Above all, it’s these things that you must fact-check. Why? Because you’re already likely to check things you know are important to get right, and you’re predisposed to analyze things that put you an intellectual frame of mind. But things that make you angry or overjoyed, well…our record as humans are not good with these things.”

So, instead of clicking that Share button because you’re feeling an emotional reaction, check your emotions, then follow the four moves to do some very quick fact-checking. If you do those things, I feel confident that you’ll share less false information and propaganda.

I’m going to walk through the moves with two examples; we’ll start with the meme above about the high school student in Oklahoma.

First move: Check for previous work. This means seeing if anyone else has written about this event or issue and what they have to say about it. Often, the thing you want to share doesn’t provide a lot of additional context, like in the example above. Who was the boy? What was the name of the school? What did other people involved in the incident say?

Here are the results.

So, it looks like Snopes has already started assessing the claim and are saying it’s unproven. If you take a closer look, you’ll see that Snopes uses a process to verify information that includes going to local news sources, like ABC8 Tulsa, to see what they’re reporting. In cases where you’re wanting to share something about a local event, this may be a good move. That’s called going upstream, and it’s our next move.

Second move: Go upstream. This means going to the original source and evaluating the credibility of that story. In our example, that doesn’t mean trying to find Jerry Coyne, but instead, going to local news sources that would have reported on this incident first, presumably. We can later evaluate the credibility of the organization/person that posted the thing we wanted to share (who is THE NEWLY PRESS anyway?) but not yet. Right now, we’re trying to get to the most trustworthy information available. With our example, here are the local articles associated with this topic that we were able to find:

In today’s digital information environment, you might see a lot of content shared across multiple sites (sponsored content, copied content) that isn’t actually written or produced by the source that is sharing the content. That’s something to be aware of as you go upstream and look for the most reliable source for the content. I’m going to link to Mike’s various helpful pages on tracking content upstream and move us along to the next move.

Third move: Read laterally. If you’re still unsure about your source, read laterally. According to Mike, “When confronted with a new site, [people] poke around the site, and try to find out what the site says about itself, by going to the ‘about page’, clicking around in onsite author biographies, or scrolling up or down the page. This makes no sense. If the site is untrustworthy, then what the site says about itself is most likely untrustworthy as well…Lateral readers don’t spend time on the page or site until they’ve first gotten their bearings by looking at what other sites and resources say about the source at which they are looking.”

The Newly Press does not have a lot written about it, aside from their own words “We support President Trump!”. Now you might say, “I support President Trump, so that source is good enough for me.” Based on what we’ve learned about Russian interference in our elections in 2016, I’d caution you to consider the possibility (and I’m not saying this is the case, I’m just asking you to consider the possibility) that The Newly Press is run by a Russian outfit aimed at destabilizing the U.S. Doing a little extra legwork before sharing something from them might help you not do their work for them.

When I do a WHOIS search for more information about thenewlypress.com website, which appears to be defunct, I learn that the domain registration information has been made private and that the domain was registered on September 5, 2017. So, in terms of learning about the organization that is posting this information, we’re not getting much. Most trustworthy sites are pretty clear about their backers, and have a track record of connection to other trustworthy sites. This doesn’t seem to be the case with The Newly Press, and it doesn’t check any of the boxes of what is a trustworthy news source.

Fourth move: Circle back. So by now I’m feeling like the image/meme above isn’t really worth sharing. But maybe you want to keep working on it. The fourth move in the process is to circle back and try other strategies to get at your questions about the information and source. Maybe see if their Twitter feed has more information. Maybe check out the WayBack Machine to see what the site was posting when it was functional. Maybe try some different search terms.

OK…that was fun right? And, I hope, the process gave you a chance to think critically about what you share in social media. 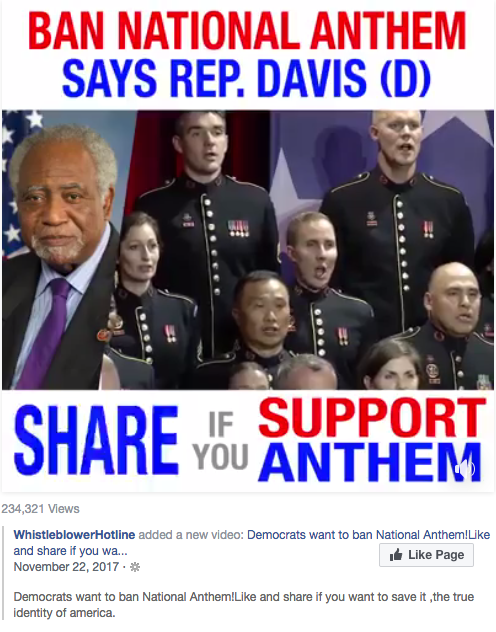 Whew! We definitely need to check our emotions first, right?! This post is designed to make us react emotionally.

First move: Check for previous work. Here are the search terms I used: democrats want to ban national anthem site:factcheck.org site:snopes.com site:politifact.com site:www.washingtonpost.com/news/fact-checker/ There were no results associated with that search. You have to be careful with a generic search (i.e., a search not focused on fact-checking sites) because you’ll end up finding the sites that perpetuate the possibly-false information. For example, when I didn’t focus my search on fact-checking and reliable sources, here is what my search pulled up: 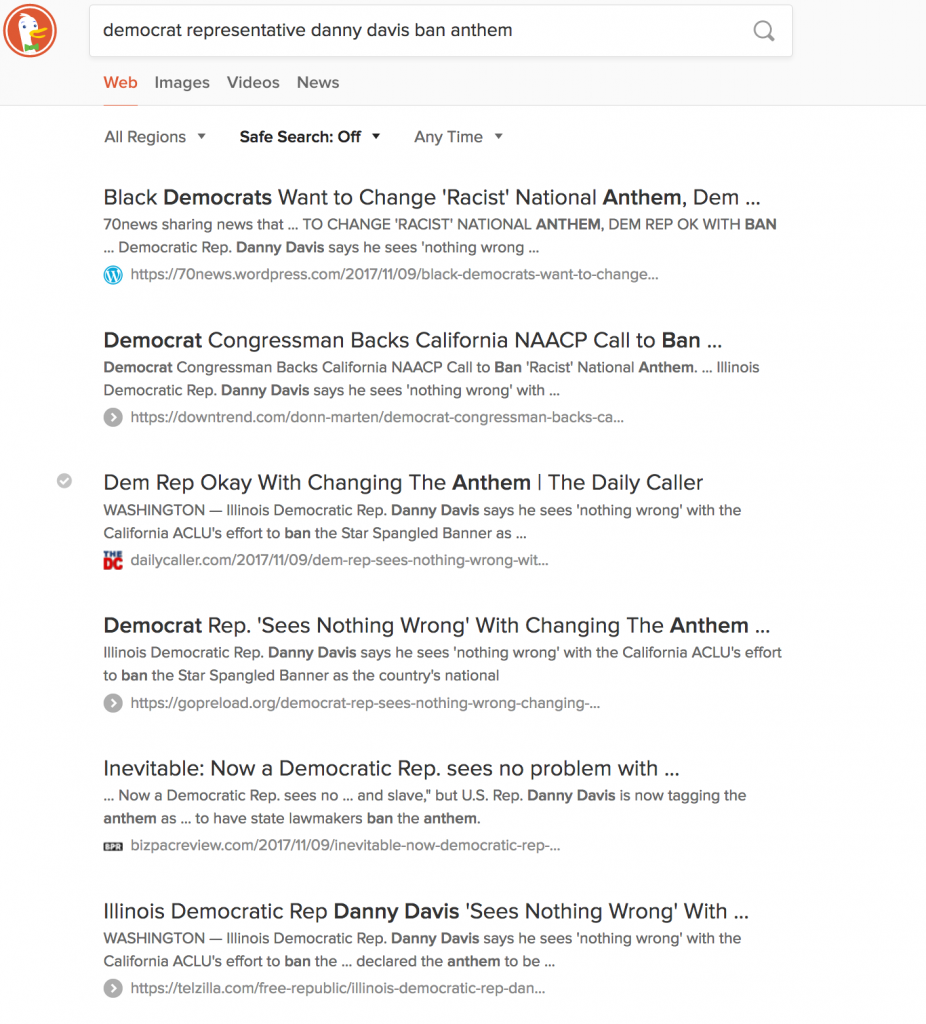 Notice the absence of credible and known news sources? Me, too.

I decided to search on Snopes to see if I could find a related story that might have been the genesis of this meme. I found the article: Does the California NAACP want to replace the national anthem?

This story was verified as true by Snopes, but Snopes checkers noted that the proposed state legislation brought forward by the California chapter of the NAACP had no legislative sponsors. That means, no legislator, Republican or Democrat, sponsored the bill. So I thought I’d circle back to what was shared and follow a different thread. The meme states “Ban national anthem, says Rep. Davis (D)” so I started searching for the source for that quote. Turns out, that’s not a quote from Rep. Davis (D), but we’ll get to that in a minute.

I found a few articles that reported on Rep. Danny Davis’ (D-Illinois) statement and then I went upstream to the original source, which took me a few minutes to find. The quotes were from this interview with SiriusXM Patriot 125 host Kerry Pickett. The Sirius show is touted a “conservative radio,” which might explain the headline of the audio piece.

In the audio clip, Kerry Pickett asks: “I’m curious. The NAACP of California is looking to have the national anthem be looked at again, perhaps look at it saying that it could be deemed as racist, perhaps it should be banned because of other stanzas in it with lyrics that they don’t find to be acceptable. What are your thoughts on that?”

Danny Davis: “Well you know, one of the things about the Constitution that our forefathers wrote–and basically that there were none of our foremothers there, there were none of our foresisters there–there are changes that can take place. There is room to change. And, intellectually, if people continue to pursue this nation to become perfected, then I see nothing wrong with that. I mean it was designed, I think they said, to form a more perfect union. They didn’t say that it was perfect at the time, but they did say that we could continue to pursue perfection and if they’re individuals who think that we can make the national anthem more perfect in terms of the goals and objectives of this country then I say so be it.”

As you can see from the actual audio from the interview, Rep. Davis does not say that the anthem should be banned. He says that he supports the notion that people in this country may have ideas about how to continually “perfect” the United States, and that there isn’t anything wrong with people exploring those ideas.

It’s a huge leap from Rep. Davis’ statement to the headlines you see in the search above and to the meme that was shared on Facebook that said that Democrats want to ban the national anthem. In fact, it’s such a leap, I would be willing to say that the post spreads false information that is intended to divide us. So maybe it’s not worth sharing.

So thanks for making it to the end of the post. If you’re reading this sentence, I’d like to think that you are considering ways to bring some fact-checking into your social media life. Just think, if we all fact-check what we share before we share it, maybe we can counteract the harm being done to our society and the harm we’re doing to each other.