Best food I’ve ever eaten and YES very gluten-free friendly. Not only are there gf options almost anywhere you go, Italians take gluten intolerances very seriously.  From the gelato scooper who switched gloves and equipment to serve some fine gelato, to the mom-and-pop restaurant who ordered specially-made gf pasta because they knew we were dining there, we felt very good about our food options in Italy.

Most of our 10-day trip was spent in Bologna, where we were doing some consulting. I know Bologna is not on the top of many people’s must-see lists, but we really enjoyed it. The food in Bologna was amazing, our hosts Maurizio and Monica were exceptionally friendly and helpful, and the summer crowds were manageable compared to more popular Italian cities. We also visited Salerno (with an afternoon and evening trip to the breathtaking Ravello on the Amalfi coast) and Florence. Bologna is known for its ragu, a divine meat sauce that you will dream about after you eat it. Seriously, I still have dreams about it. In Salerno and Ravello, we had lots of seafood (did you know that tiny legs of red octopi are gf? Yeah, I didn’t really want to know that either). In Florence, we found a pizza place that makes a fabulous gf crust. And of course, gelato. Gelato, gelato, gelato. Shall we dig in?

As with our Paris trip, my pre-trip planning involved looking into gf restaurants near travel stops and learning how to ask for gluten free options in language. The phrase “senza glutine” came in handy every day. Our hosts were very helpful–calling ahead to restaurants when they were with us and connecting us to local resources who could help when they weren’t with us. One new friend, Francesca, showed me the Associazione Italiana Celiachia website and mobile app, which turned out to be more helpful than the Find Me Gluten Free app I usually use. Francesca, and many other friends we made, emailed me lists of restaurants or products to try at our destination cities. These people are wonderful and they made our trip a much more relaxed experience.

A couple of times, we cooked our own meals in the apartment where we were staying. The grocery market around the corner (Supermercato META) had a gluten free section filled with goodies I could eat. We paired gluten free tagliatelle and fresh prosciutto, parmigiano reggiano, and sundried tomatoes with our favorite regional wine, falanghina, for a delicious meal. We did a similar thing in Florence, with delicious finds from Eataly Firenze.

Here were some of my favorite food spots from our travels:

Casa Monica, Bologna – So forget the fact that we were jet-lagged out of our minds and hadn’t slept for more than 36 hours. Our hosts and the three-hour meal at this restaurant made an impressionable start to the trip. The waiters were knowledgeable about gf options and the restaurant provided gf pasta for most of their dishes. The lovely outdoor patio is just icing on the cake.

Buca Manzione, Bologna – Hands down my favorite restaurant of the trip. Best ragu in the city, if you ask me (not that I tried ALL of them, but there’s always next time). As I said before, I still dream about this meal. First course, I had the tajadel strecchi con la conza ed parsott (if that doesn’t look like familiar Italian spellings, that’s because the menu is in an old Bolognese dialect). The menu was a little hard to navigate, but the restaurant owner spent several minutes with us explaining what was and was not safe for us. The tajadel strecchi (tagliatelle) had a prosciutto-based meat sauce that rocked my world. I can’t even remember what I had for the second course because the primi was so good. Bonus: They provide gluten free crackers for snacking while you wait for your meal.

La Baita Formaggio, Bologna – We accidentally found this place while straying down a random alley. We were hungry and lo and behold this alley was lined with cheese & meats shops. Tell them to skip the bread and go straight to a plate of local cheese and meat cuts. Just make sure you are familiar with which cured meats are a no-go. 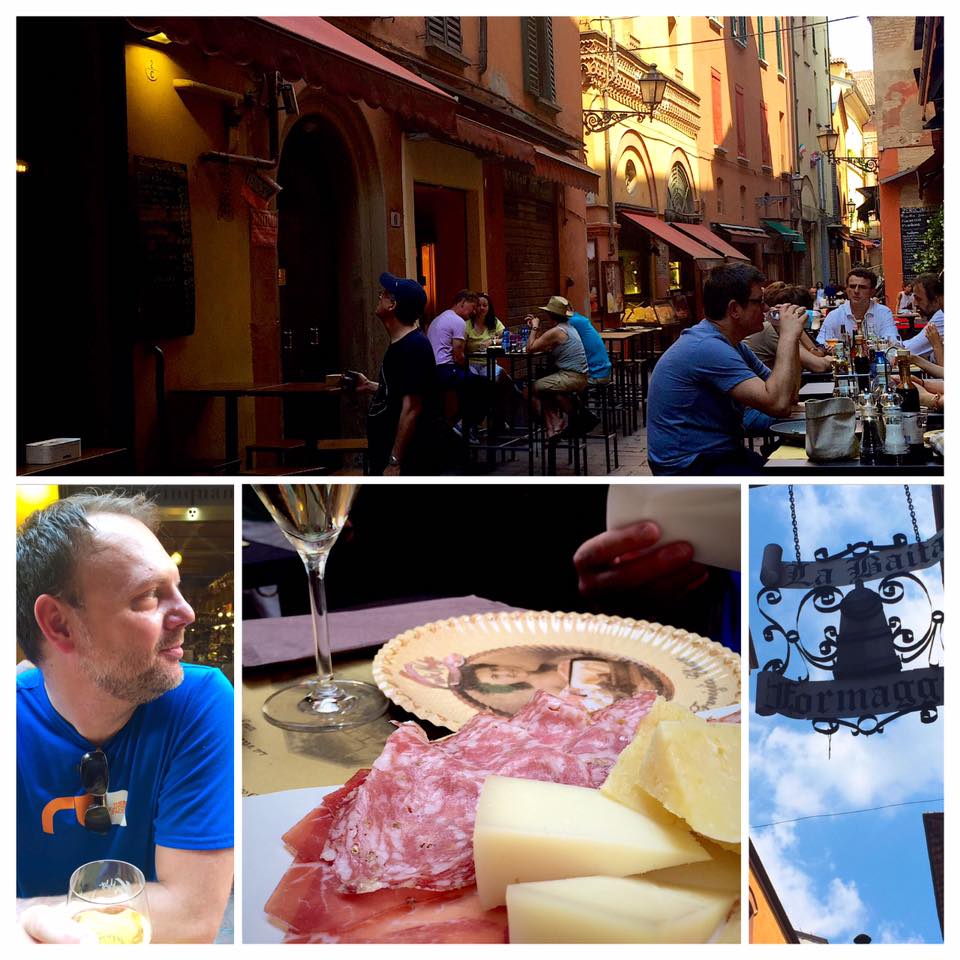 La Cucina, Bologna – Tucked away in the Mercato delle Erbe, La Cucina offers good food in a hipster foodie environment. They don’t have a lot of gf options, mind you, and their tiny kitchen probably has cross-contamination issues. But if your sensitivity is not too bad, you should be fine. I had the asparagus and sausage risotto, which was their risotto special of the day. Reservations are required for any eatery at the Mercato. It’s worth a visit, even if you don’t stay to eat. Bonus, do the Google Maps street view inside Mercato delle Erbe. Cute stuff. After you visit Mercato delle Erbe, go across the way to Bar Senza Nome, which is run by charming deaf owners. Worth it. 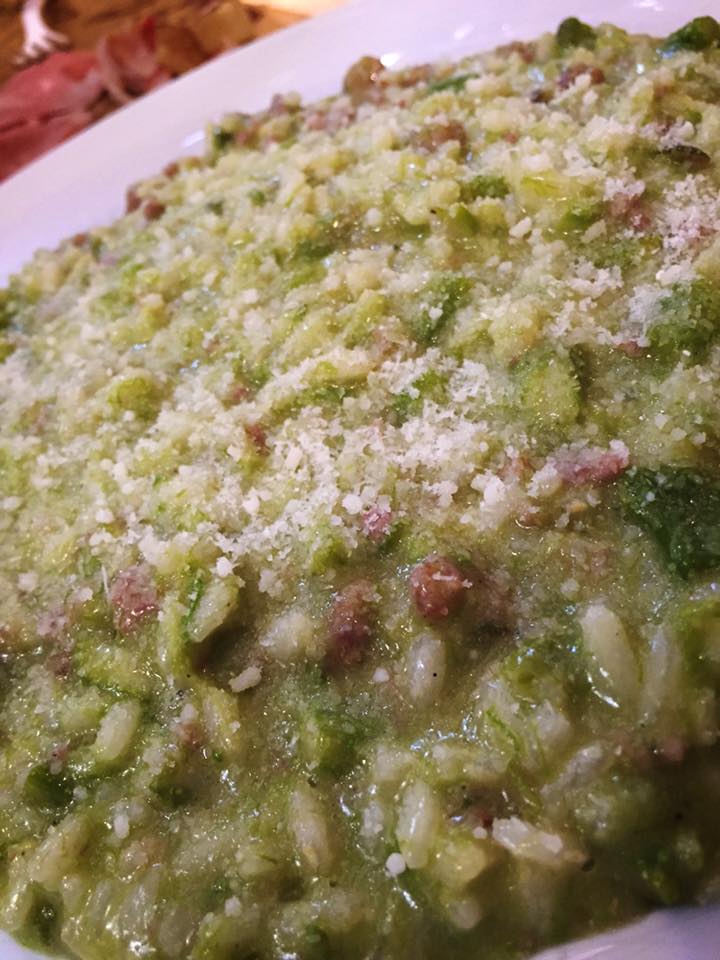 Gelateria Galliera 49, Bologna – This gelateria just happened to be close to our apartment so we visited it pretty much every night we were in Bologna. Galliera 49 offers local flavors in some pretty unexpected combinations, along with your traditional pistachio, hazelnut, chocolate, and more. We always grabbed a cup and walked through the porticos of nearby buildings and university. Fun fact: Bologna’s many porticos were built dating back to the 13th century to accommodate population spikes in the city. 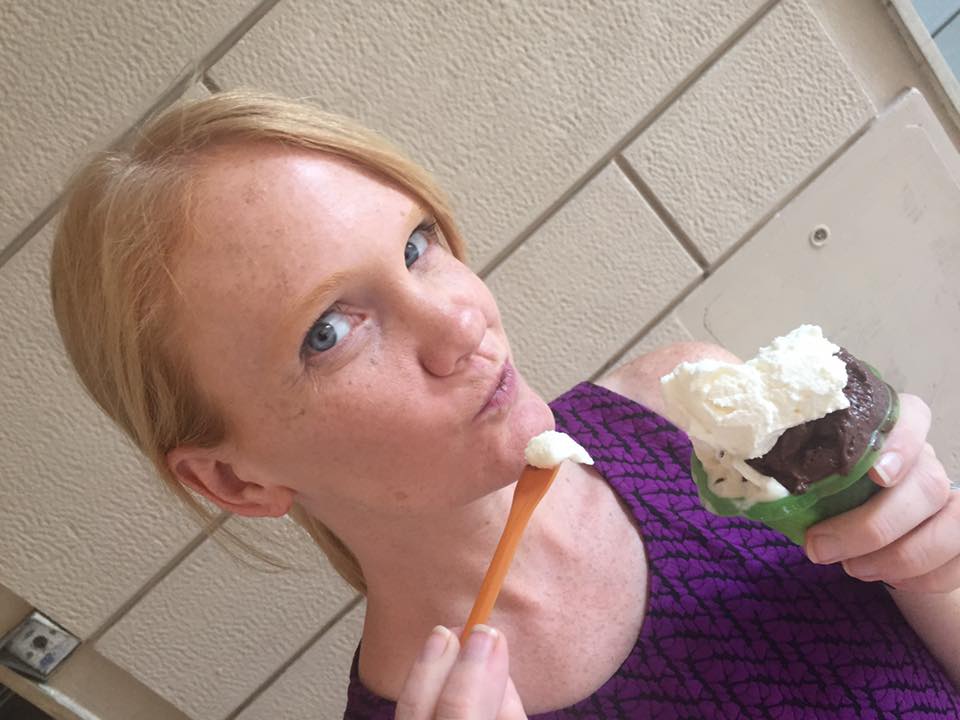 Hotel Palumbo, Ravello – Now we ate at the famous Hotel Palumbo as part of a corporate event, not because we chose it ourselves. First things first, the view from the hotel’s garden is unmatched. We had drinks and apps while roaming the garden–this after exploring Villa Rufolo (the place that inspired some of Wagner’s works)–and it took my breath away. I mean, Ravello itself is just gorgeous and the hotel just builds on that. I wasn’t crazy about the food–this is where I had octopus legs sprinkled over gluten free pasta–but the wait staff was so attentive and prepared to accommodate our needs that I have to list this place as a favorite. Besides, if you have a chance to go here, just go. Don’t even worry about food. Feast on the view.

Bonus: On the crazy drive along the Amalfi coast to get to Ravello, you will see lemons the size of your head. Don’t miss the Limoncello for which this area is known. 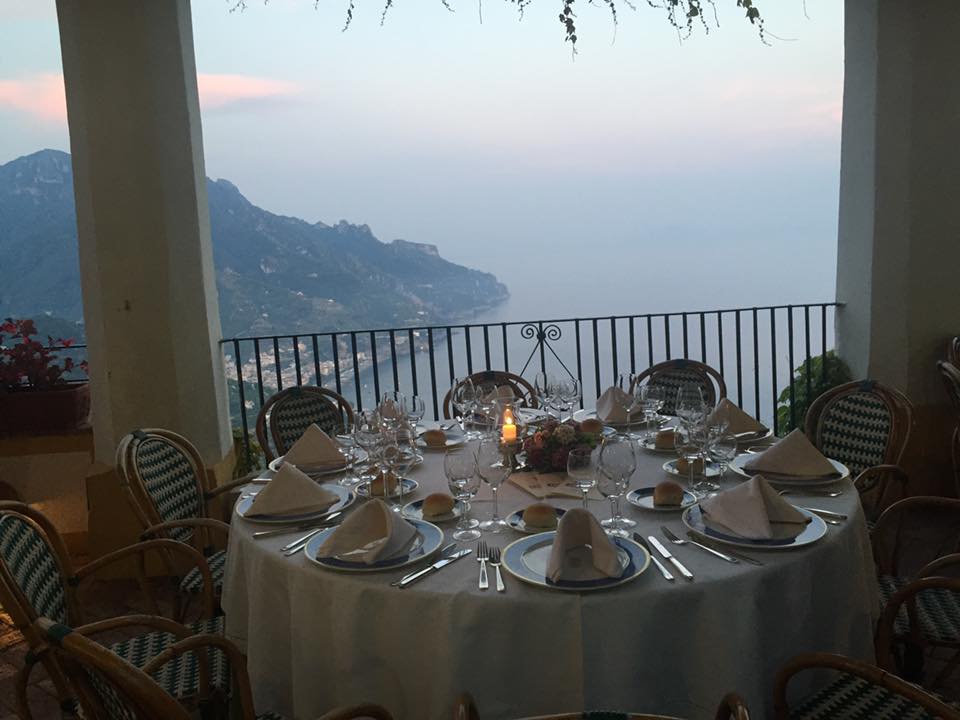 Ciro and sons, Florence – Right, so we spent a couple of days in Florence. The crowds and heat were just painful, but we found solace in the sweet little Airbnb my husband found. Within walking distance was the pizza place every gf blog I’d read raved about, Ciro and sons. I’ll admit it was good enough that we ate there twice. The first time, our meal was spectacular, complete with a gluten free dessert and free-flowing wine (not free, but free-flowing). The second time, I was exhausted and homesick and this place didn’t stand a chance of offering me a good meal. I picked at my food. Nothing against the restaurant, but sometimes you’re just not feeling it.

Tavernetta del Battistero, Florence – This place was unplanned. A surprise thunderstorm drew us to its protected porch, and we were so hungry that we stayed for a late lunch / early dinner. I ordered a risotto dish that had some crazy cheeses and prosciutto in it. Very tasty. Most of their dishes could be made with gf pasta, but they did not have gf pizza dough.

In case you are wondering, yes, our Airbnb in Florence was super sweet. That’s Il Duomo in view from our little terrace. 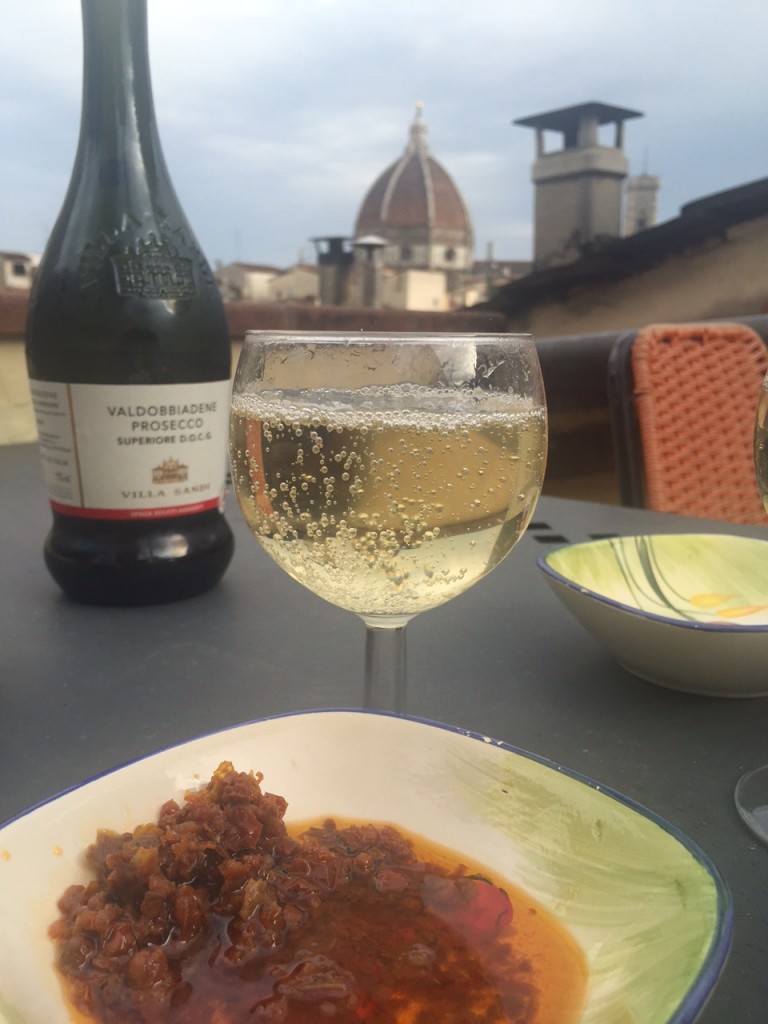 I hope this post gives you Italy-bound gf travelers some help. Moral of the story: Italy is amazing and Bologna is a can’t-miss stop on your gf adventures.